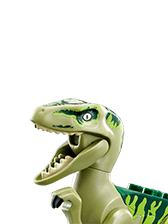 Charlie is the youngest member of the current raptor pack, and its least-experienced hunter. Her instinct-driven reactions make her hard to predict, so Owen never takes his eyes off her during training sessions. As the “rookie” of the group, Charlie looks to Blue for guidance and commands during hunts, and will immediately give up a meal to her pack leader. The InGen scientists have genetically programmed her with the dramatic striping of a large Green Iguana.