The Joker and his team of villains have transformed Gotham City’s amusement park into the nightmarish Jokerland and trapped Starfire, Beast Boy and Robin. Drive to the rescue with Batman™ in the awesome Batmobile. Dodge the cannon and target the clown robot with the shooting missiles. Then it’s time for some serious super-jumping action to bring down the villains. Bam! Topple The Penguin from his podium. Wham! Launch a perfectly aimed jump to release Robin from his upside-down bike ride with Harley Quinn. Pow! Take down Poison Ivy from her swinging branch. Finally, knock The Joker from the clown’s mouth down the slide and into the poison pool chamber! Includes 8 minifigures with assorted accessories: Batman™, Robin, Beast Boy, Starfire, The Penguin, The Joker, Poison Ivy and Harley Quinn. 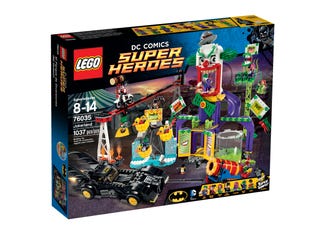