Learn more
Warning!
Choking Hazard.
Small parts.
Building Instructions
7+
Ages
204
Pieces
180
VIP Points
21158
Item
2115821158
Do you know a Minecraft™ player who would love to care for the cute panda figures they see in the Minecraft computer game? Well, now they can! The LEGO® Minecraft Panda Nursery toy building set brings these adventures to life, giving kids an authentic, hands-on Minecraft play experience in the real world.Kids create their own Minecraft stories with a LEGO building set!Children aged 7 and up can continue their online Minecraft adventures in a physical environment. They can look after and entertain the baby panda, prepare the nursery building and rooftop bed where the playful cub sleeps, and provide food for everyone. There’s lots of bamboo for the pandas to nibble on and Alex is here with a delicious-looking toy cake!Cute pandas make LEGO Minecraft even more magical! Best of all for adults, they make a great Christmas or birthday gift for kids. LEGO Minecraft sets put open-ended independent play in kids’ hands. And, with the posable, adorable, new-for-January-2020 pandas – they’ll never want to put it down! 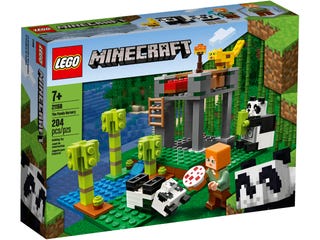