It’s launch day at the LEGO® City Spaceport. Load the satellite into the space shuttle and use the powerful, mobile launchpad to slowly maneuver it to the launch site. Then deliver the astronauts with the service vehicle and get strapped in as countdown commences, 3… 2… 1… liftoff! Feel the power as the main engines ignite and send the shuttle hurtling into space. Eject the external fuel tank and rocket boosters and then open the cargo bay doors ready to launch the satellite! It’s another successful mission for the LEGO City Spaceport! Includes 5 minifigures with assorted accessories: a scientist, 2 service personnel and 2 astronauts. 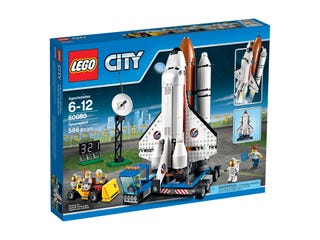 Some exclusions apply. Visit our Deliveries and Returns page for more information.
Overall RatingAverage rating3.9out of 5 stars
3.9
(8 Reviews)
75% would recommend this product.

Play ExperienceAverage rating4out of 5 stars
4.0
Level of DifficultyAverage rating2.2out of 5 stars
2.2
Value for MoneyAverage rating3out of 5 stars
3.0
Please note that by submitting a helpfulness vote on a review your IP address is collected and stored by our trusted third party service provider for the sole purpose of preventing multiple entries from the same IP address. To see how to control your personal data, please see our Privacy policy.