You were born to explore the universe! Build and inspire the next generation of astronauts with LEGO® Space rockets and vehicles – Let’s Go!

Display and role-play with this majestic meter-high LEGO® brick model of the NASA Apollo Saturn V. Packed with authentic details, it features 3 removable rocket stages, including the S-IVB third stage with the lunar lander and lunar orbiter. The set also includes 3 stands to display the model horizontally, 3 new-for-June-2017 astronaut microfigures for role-play recreations of the Moon landings, plus a booklet about the manned Apollo missions and the fan designers of this educational and inspirational LEGO Ideas set. 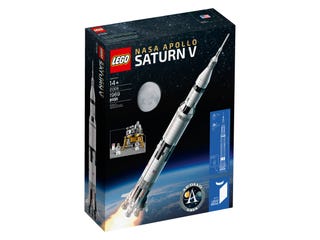 Some exclusions apply. Visit our Deliveries and Returns page for more information.
Overall RatingAverage rating4.9out of 5 stars
4.9
(588 Reviews)
98% would recommend this product.