Roll into battle against the clone army on Geonosis with the devastating LEGO® Star Wars™ Hailfire Droid™! As featured in Star Wars: Episode II Attack of the Clones, this highly maneuverable Droid can speed across any terrain on its huge wheels to join the battle. As well as giant rotating wheels, this armored Droid features folding side pylons, an adjustable gun and 4 awesome spring-loaded shooters. Includes a Clone Trooper Lieutenant minifigure with a weapon and 2 Super Battle Droids. 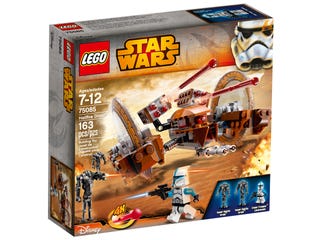