Learn more
WARNING! CHOKING HAZARD.
Small parts. Not for children under 3 years.
Building Instructions
5+
Ages
441
Pieces
11009
Item
1100911009
Kids can get doubly creative with this fun LEGO® set. First by building cool models, and second by transforming them into shadow puppets using Light Brick Shadow Casters! From building bricks to shadow plays Kids aged 5 and up will be captivated when their mini-models become cool shadow images! Imaginations will run wild as images move, shrink and enlarge, inspiring endless storytelling activities. With 12 fun LEGO toys for kids to make – a castle, face, princess, bat, rooster, crook, pirate ship, owl, ghost, windmill, shark and a dinosaur – plus extra bricks to build creations of their own, anything can happen! And, when the 2 Shadow Casters come into action, the shadow plays never stop! Kids build skills as they design, display and create! LEGO Classic sets put ideas and inspiration into young hands. Simple guides for the fun models soon get kids started with their indoor activities. As they discover the joy of constructing creations of their own, they acquire skills that are key to future success. 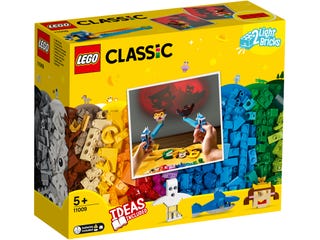