Kids role-play a fun story from Harry Potter and the Order of the Phoenix and dream up imaginative adventures of their own.

Kids slide a panel to reveal a hidden entrance to the room.

The rules explode off the wall, just like in the movie!

With simple instructions included, kids aged 7 and up can build with confidence.

Many ways to play

LEGO® Harry Potter™ Hogwarts™ Room of Requirement (75966) transports young witches and wizards into a magical world as they join a group of friends on a secret mission to overcome powerful dark magic.

Harry Potter and the Order of the Phoenix™ role-play toy
Fans of Harry Potter can recreate classic movie moments and conjure up imaginative adventures of their own with Harry, Hermione Granger™ and Luna Lovegood™. Dumbledore's Army are practicing spells in the mysterious Room of Requirement. Kids can help Harry teach the Patronus charm. There’s a Hare for Luna and an Otter for Hermione. Power shooters fit into the minifigures’ hands and fire at the mechanical Death Eater toy. With a host of cool features and accessories, the magical fun will never end! 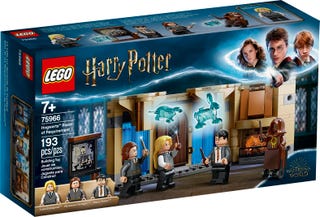 Some exclusions apply. Visit our Deliveries and Returns page for more information.
Overall RatingAverage rating4.7out of 5 stars
4.7
(26 Reviews)
92% would recommend this product.