Get creative kids staging their own spinning-and-kicking battles with this impressive Epic Battle Set- Jay vs. Serpentine (71732) building toy. The durable ninja playset features a brick-built snake statue and spinning battle platform for kids to enjoy hours of role-play fun.

The best cool toy for kids
This ninja battle toy features 2 minifigures: a new-for-January-2021 Jay and a Legacy Serpentine warrior from the LEGO® NINJAGO® TV series. The playset offers hours of fun as kids stage amazing battles between the pair to claim the 4 prized blue weapons.

Top toys for creative kids
LEGO NINJAGO playsets take kids away from their screens to enjoy imaginative adventures in a fantasy world. There they can learn valuable life skills and team up with their heroes to play out action scenes with an amazing collection of ninja toys including mechs, planes and dragons. 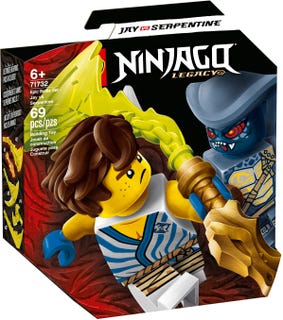